MMM 4 — For jukebox and country…

They say you can’t go home again. Sometimes, though, you can take a bit of home with you. It’s especially convenient if you carry it in the form of a song or two. I do that. The songs are lightweight and easy to carry, and my older brother Walter helped me pack them up.

Let me tell you about Walter. He’s what I’d consider an old soul, and I believe he was born that way. He’s also a gentle soul, and one of the kindest, most even-keeled individuals you could ever hope to meet.

A few years back, in the midst of a little Facebook feud with me, a mutual acquaintance de-friended (should that be “enemied”?) just about everyone he knew with the last name Bain, because he was mad at me and a sister or two. The rest of the Bains — including Walter, who wasn’t involved in the feud — were collateral damage.

In one memorable online conversation, an in-law and I were trying to figure out who could still see what the aforementioned mutual acquaintance was posting — trust me, there was a positive reason for wanting to keep tabs on him. The in-law asked if Walter could still see this person’s page, and when I said no, that he’d de-friended Walter, too, the in-law asked incredulously, “Seriously… Who does Walter piss off?! …and how?!”

It was a great question, because that’s just the kind of person Walter is. It’s impossible to truly be mad at him — unless maybe you’re our dad 40 years ago, seeing Walter’s history grade for the first time.

There was also the time that Walter took a headbutt to the face from a drunken fraternity brother on a ‘roid rage, when it should have been my face being smashed. But it’s not like Walter had picked that fight — I had. But he took it upon himself to defend me, and even then, it was with words only.

Any other time, Walter would be what you call “disarming.” That word has also been used to describe the sound of one of the bands I used to hear fairly often from his turntable. He influenced my tastes with lots of bands, but two of them stand out.

One was pretty political, and I’m going to leave them alone for the time being. I would be remiss if I didn’t include them in this little self-analysis, but I need to wait until later in the month, when I hope to be more fully ensconced in music and removed from politics. So tonight, it’s the disarming one — America.

Some purists scoff at this band, considering them to be soft rock or even worse, easy listening. Those people are full of shit. “Soft rock” makes about as much sense to me as “painful orgasm” — it’s an oxymoron. Rock is rock, easy listening is easy listening, and ne’er the twain shall meet.

America sang in brilliant harmony and played a lot of acoustic guitar — call them “folksy” if you must, but they still played rock and roll. (For the purposes of this argument, we’re going to pretend they never recorded Muskrat Love, okay?)

Gerry Beckley, Dewey Bunnell, and Dan Peek met in high school while their fathers were stationed at an Air Force base in London. Once they started playing together, legend has it that they settled on the name “America” in homage to the Americana jukebox they had seen on base. But it was also in homage to their homeland, and let’s face it — “U.S.A.” just doesn’t have the same ring to it as a band name.

We didn’t need a jukebox in our house; we had Walter’s public listening station. As a teenager, he set up a turntable, receiver, and headphones on the floor in a corner of our dining room. I’ve never asked him why he didn’t do it in the privacy of his own room, like surlier teenagers, but that’s just part of the Walter mystique.

It’s probably something simple like, the upstairs had bad insulation, and it was too stinkin’ cold to sit up there without being covered by blankets. Could be that we had a new baby brother in the bedroom we shared, and even “soft rock” would have awakened him from naps and early bedtimes.

Or maybe I’m just remembering one brief period when Walter had that setup temporarily, but it stands out as permanent in the hazy memories of a seven-year-old, 39 years later. I don’t want to know, frankly. Whatever the reason, I used to watch and listen in awe as he played the same vinyl records in that corner, repeating them multiple times as he diligently taught himself to play his favorite songs on his own beloved six-string.

I’m glad he did, because those songs imprinted themselves on my brain. I carried them with me into my teens, long after Walter had moved out and I had set up my own stereo in what was by then my bedroom. The old songs didn’t surface often during that time, as I was chasing my own budding teen-aged musical tastes.

But it wasn’t long after I’d left home and moved to Raleigh that I happened across History in a CD store, and the songs opened up again inside my head. I bought the CD immediately and sped back to my apartment to listen to it — using earbuds as I sat on the floor in a corner of my dining room, of course.

The songs were as great as I’d remembered — Dewey, Dan and Gerry were true craftsmen and poets, and their work endures. My favorite was, and still is, Sister Golden Hair — a simple-but-unconventional love song in which Gerry pleads with a lover to stick around, despite his aversion to marriage. That’s my interpretation, anyway. I did some Googling, and it seems there are lots of interesting theories on what the song is about — falling in love with a platonic friend, being in love with a nun, and even more outrageous ones.

And you know what? It doesn’t matter which interpretation is right. It’s clearly about love, regardless. Plus, it’s an uplifting song with a strong melody, fantastic background vocals, and one of my favorite things in music — effective interplay between acoustic and electric guitars. To me, that’s like being able to eat both a golden Oreo and a traditional Oreo at the same time. 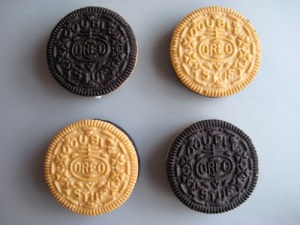 The song also has what I like to call a “slow build.” Please note — I’m not a professional music critic, and I make up terms like that all the time. But that’s what I call it.

It starts with acoustic guitar on rhythm, strumming some pretty basic chords, then tosses in a couple of sassy licks on electric as a teaser — kind of a moodsetter. Once the vocals start, there’s a tiny bit of ornamental percussion, then the rhythm section makes itself known with a crisp drum roll at 0:45, before falling back into its primary function.

And that’s when the cool thing happens. At first it’s faint, but if you listen, you’ll notice the start of some harmonic background vocals — specifically, just a little “ooooooh” gradually building into an “aaaahhhhhh.” That opening acoustic rhythm and sassy guitar lick come back for the bridge, and when the second refrain starts, the background vocals are up to a stronger “doo, doo, doo, doo” and it doesn’t seem like they were ever not there.

By the middle of that refrain, the sassy lick has become a full-fledged electric lead, weaving in and out of the acoustic rhythm like they’re old friends, while the background vocals follow along for a bit. Near the end, they completely take over in a cliched “bop, doo wop” that somehow works despite itself, and the song ends with a faint count-out that you’re likely to miss if you’re not listening. (That’s the benefit of the earbuds.)

Add some engineering from one of the finest producers in the trade — George Martin — and you have a three-minute, constantly surprising masterpiece of rock and roll music. Golden Oreo, traditional Oreo, and plenty of milk to dunk them in — I think it’s tasty. What do you think?

Well I tried to make it Sunday, but I got so damn depressed
That I set my sights on Monday and I got myself undressed.
I ain’t ready for the altar, but I do agree there’s times
When a woman sure can be a friend of mine.

Well, I keep on thinkin’ ’bout you, Sister Golden Hair surprise.
And I just can’t live without you; can’t you see it in my eyes?
I been one poor correspondent,
And I been too, too hard to find,
But it doesn’t mean you ain’t been on my mind.

Well, I keep on thinkin’ ’bout you, Sister Golden Hair surprise.
And I just can’t live without you; can’t you see it in my eyes?
Now I been one poor correspondent,
And I been too, too hard to find,
But it doesn’t mean you ain’t been on my mind.

Oz never did give nothin’ to the spin man….

Dan is an award-winning humorist, features writer, emcee and entertainer from Raleigh, NC. His collection of humor essays, A Nay for Effort, has earned him fans from one end of his couch to the other. Why not join them and buy one? (You won't have to sit on his couch.) Dan will donate 10 percent of the book's proceeds to education. You can check it out at www.danbain.net; thanks!
View all posts by Dan Bain →
This entry was posted in Family, Music and tagged america, Dan Peek, Dewey Bunnell, Gerry Beckley, humor, music, sister golden hair. Bookmark the permalink.