My trip to Mylanta, aka don’ts for dads

I’m blaming my weekend-long stomach ache on Friday morning’s glazed donuts. Or maybe it was the airport food. Or the two bumpy flights within 24 hours. Or the plethora of beans at Hard Rock Cafe. Or even the numerous nauseating views from 65-72 stories up. Coulda been any of them, or maybe the unhappy combination of them all. But I’m sure it started with the donuts.

I’ve been on a diet lately, so anything particularly rich or strong is likely to set me off. Yeah, the donuts had to be the start of the downward spiral. I can’t eat anything crispy or creamy, so when you combine the two (and misspell them), I’m in trouble. So those three and a half Krispy Kreme glazed donuts Friday morning were a definite mistake.

But I had to do it. The event was called Donuts for Dads — I would have looked like an ingrate if I’d turned them down.

This is something the first-graders at my sons’ school do each year. I believe the philosophy behind it is, the kids are out of school when Father’s Day hits, so they pick an ordinary day during the year to lavish us with gifts and cholesterol. I can’t remember if it fell during November when Christopher was in first grade, but I bet it did. I’m sure it’s no coincidence that the event takes place as far from mid-May — the time for Mother’s Day — as possible, without rounding that bend and heading back toward that time of year again. Can’t have both parents adulated too close to one another, right?

Regardless, here’s how it works: the kids make cute little gifts for their dads, then the dads come to school at the start of the day, receive their gifts, pose for father-child photos, and walk to the Multipurpose Room for donuts, coffee and juiceboxes. 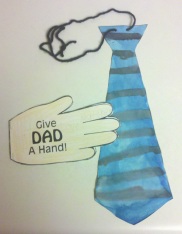 The gifts were a necktie cutout, painted by the child and attached to a length of yarn in order for the dad to wear it over his head; a “DAD” magnet decorated with little foamie icons of fatherhood/being a guy; and hand-shaped booklet, colored and personalized by the child and called “Give Dad a Hand!”

Most dads would probably get a fill-in like “painting the house” or “fixing the toilet” but Matthew filled in “teaching the cub scouts.” That, apparently, is the extent of my handiness — teaching.

This doesn’t mean I don’t appreciate the things he wrote; they were very sweet. I’m just not crazy about the image it must give of me. It got even worse with a similar paper taped to the wall outside his classroom — each child filled in another series of sentences with specific information about their fathers. This one didn’t follow a “hand” theme; it was just random facts. And I was mortified by this incorrect tidbit on Matthew’s sheet: “My Dad’s favorite team is      UVA     .”

Wa-hoo-what?!? I went to Virginia Tech! I don’t mind that he didn’t remember that, but of all the incorrect answers to give, he had to pick the archrival of my alma mater — there’s no worse insult for a Hokie!

It’s impossible to be mad at this face.

Of course I won’t hold it against him — he’s never lived in Virginia, so he’s unaware of the rivalry. We live in North Carolina, where you can be sure his mother has schooled him on the difference between N.C. State and UNC. I’ll be sure to remind him where I went to school — some time in the future, when he won’t remember what he wrote, and therefore won’t feel the burning shame.

Meanwhile, I have to live with it. This doesn’t mean I’m taking a Cavalier attitude toward it; I’m simply willing to forbear. But why does it have to be stuck on the wall, for everyone to see? I don’t like having other parents think I’m one of those yahoos from Charlottesville; I’d almost rather be accused of having been part of the football program at Penn State.

He made up for his grievous error with other fill-ins from both the booklet and the paper on the wall. My favorite sentence from the booklet was this one: “My Dad gives me a hand when I do something well. He was proud of me when      I got a hundrid on my spelling test.     ” Read that again, knowing that I have triple-checked to make sure I typed it verbatim, and revel in the delicious irony — it just doesn’t get much cuter.

But it was this gem from the paper on the wall that really got to me: “I love it when my Dad       tells me he loves me     .” My Hokie heart grew three sizes that day. Heck, I even forgave him for the UVA gaffe and gave him a big hug before heading to the main event.

In the Multipurpose Room, they had stacks and stacks of those beautiful, green and white, flat-dozen boxes of Krispy Kreme glazed donuts. They’re not hot, but they’re free. Matthew told me ahead of time — dads can eat two, kids can eat one. But I found a loophole.

Earlier in the week, I’d received a heart-warming request from the mother of one of the boys in our Tiger Cub den — his dad was going to be out of town Friday, and he wanted his den leader (me) to be a “substitute.” (Technically, I think he wanted to sit with Matthew, but I was still touched by the request.)

His name is Jack, and he’s in a different homeroom, so his teacher sent him to us in Matthew’s homeroom, where he posed impatiently for a quick picture with both of us before running ahead to the Multipurpose Room while I read Matthew’s booklet and paper. I think he was afraid he’d miss out on his donut. We eventually caught up to him, and I tried to keep an eye on both boys while we were in the crowded room, but they naturally went in opposite directions with their donuts and juice.

Jack’s homeroom teacher spotted me from across the room, and came over to make sure he had found us. “Found and lost again,” I said, and she laughed at my “joke.” I’m still not sure she realized I was serious, but while she was laughing, I asked if, since I was doing double duty, I could have double the other dads’ ration of donuts. She assured me I could eat as many as I could hold — a dangerous offer to a man of my donut-eating skill — and thanked me again for watching Jack. I was about to admit that I hadn’t watched jack when I caught a quick glimpse of Jack’s head, bobbing through the crowd. “Sure thing!” I crowed. “There he is now!” That was the last I saw of him, but his mom sent me an email Friday afternoon to thank me, so I’m assuming he showed up where he was supposed to be after Donuts for Dads was over.

At least I got Matthew back to class before I left.

Matthew ran up shortly after that and told me he was full, stuffing half a glazed donut in my hand. I was fairly certain that he’d been standing right next to a trash can before he came over, but first-graders prefer to use their parents as waste receptacles. So I obligingly ate the other half before heading off to stake my claim to Jack’s dad’s share. I only ate one of his two; I figured it would be greedy to eat the second one, although I really wanted to — for something that’s 200 calories and 12 grams of fat, they really do taste lighter than air.

They didn’t feel that way later in the day, however — whether because I wasn’t used to eating something that sweet, or because I’d been a little stressed by eating them while searching for Jack. Regardless, the bad feeling in my stomach was only going to get worse with the rest of the weekend’s activities. I rushed through the day’s work, my mind on my upcoming air travel — something else that does bad things to my digestive system.

Friday night, Christopher and I had to fly to Atlanta, because yesterday morning, he had an audition for Kids’ Jeopardy!

(Please note — I’m not really the emotive type, and I didn’t stick that exclamation point there simply to show my excitement. It’s required, because it’s part of the show’s name — much like Yahoo! There, I did it again. I hate that. Maybe I should only use those names in the middle of a sentence, so it doesn’t look like I’m getting too excited. But that looks odd, too — naming Jeopardy! or Yahoo! in the middle of a sentence, forcing punctuation to appear where it shouldn’t be used inside of its normal context. See what I mean?)

Anyway, Christopher took an online Kids’ Jeopardy! test last month, along with 6000 other 10- to 12-year-olds. He was one of about 275 selected to advance to the next round, which is live auditions and more tests (without the benefit of a parent sitting at the computer with them this time) in one of four U.S. cities. We chose Atlanta.

Only King Kong wouldn’t be scared of the hotel’s height.

The auditions took place at the Peachtree Plaza Westin, billed as the tallest hotel in the western hemisphere. Our room was on the 65th floor, which didn’t help my digestive system any.

The airport food wasn’t exactly friendly, either. Yet somehow I let him con me into eating it at both our departure and arrival airports — and there wasn’t even 90 minutes of flying in between! (Okay, that time I meant to be emotive.)

The next day’s activities only served to exarcerbate matters. Not the audition, mind you, but the whirlwind of eating, touring and flying that took place afterward. But all of that’s a story for another time — suffice it to say, we won’t know whether Christopher made the cut for a while, so I’m not cheating you of any exciting news by stopping here. There were some interesting things that happened, but nothing so exciting that it can’t wait for a healthier blog session.

All I can say for now is, I don’t know why they call that place “Hotlanta.” After this weekend, I’m inclined to think “Mylanta” is more appropriate….

Addendum: As long as this is Freshly Pressed and I’m getting more views than I’m ever likely to see again, I’m going to totally whore myself and tell you that I’m selling an allegedly funny book.  A Nay for Effort has received lots of positive reviews; makes a great gift for whatever holiday you happen to celebrate; costs $14; ships for free through the end of this year; generates donations to teachers; and will help me buy more Krispy Kreme donuts!  (Exclamation point required, in this case.)  That is all; whoredom complete.

Dan is an award-winning humorist, features writer, emcee and entertainer from Raleigh, NC. His collection of humor essays, A Nay for Effort, has earned him fans from one end of his couch to the other. Why not join them and buy one? (You won't have to sit on his couch.) Dan will donate 10 percent of the book's proceeds to education. You can check it out at www.danbain.net; thanks!
View all posts by Dan Bain →
This entry was posted in Air Travel, Education, Father's Day, Parenting, Sports, The Kids and tagged atlanta, donuts, Father's Day, humor, jeopardy, kids jeopardy!, krispy kreme, penn state, uva, virginia tech. Bookmark the permalink.

96 Responses to My trip to Mylanta, aka don’ts for dads