Officials in New Taipei City, Taiwan, know how to polish the turd – in fact, they practically know how to gold-plait it.  To provide incentive for dog-owners to clean up after their dogs do their business, the city is offering raffle tickets for poop. 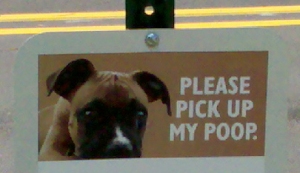 The city is giving out trash bags to assist with the cleanup, as well as resorting to the more fascist measure of offering rewards to whistle-blowers who provide photographic evidence of dog-owners shirking their, umm, duties.

I had to think about that last bit for a while before I realized – only video could yield undeniable evidence. Still photos aren’t reliable; any clever photographer with a vengeful spirit and a bran muffin could plant the evidence themselves and shoot a fake series of photos. One can only hope city officials will demand DNA evidence along with the pics, but keep your eyes on this one, Amnesty International.

I’m also hoping city officials are willing to accept raffle entries via airmail; if so, I’m stocking up on Metamucil and trash bags, and am going to be busy for the next few days. The way gold is rising in value, I have nothing to lose that I wouldn’t have lost, anyway.

My final wish for this story is that our own government officials take a lesson from it – if you really want to get your citizens involved, you have to let them hand you a bunch of crap for once.

Dan is an award-winning humorist, features writer, emcee and entertainer from Raleigh, NC. His collection of humor essays, A Nay for Effort, has earned him fans from one end of his couch to the other. Why not join them and buy one? (You won't have to sit on his couch.) Dan will donate 10 percent of the book's proceeds to education. You can check it out at www.danbain.net; thanks!
View all posts by Dan Bain →
This entry was posted in Bathroom humor, Travel and tagged dog, gold, humor, lottery, poop, raffle, taiwan. Bookmark the permalink.