I dragged my flu-ridden self off the couch tonight to attend the annual science fair at my sons’ school. Christopher’s in fourth grade this year — one of the two years when participation is mandatory. I figured if he could put himself through the whole difficult process, then I could at least down some Ibuprofen, grab some cough drops and ignore how miserable I feel for the 45 minutes it would take to watch the awards ceremony, help him carry his entry to the car and console him over his lack of a winner’s ribbon.

I admire the great job our school does with teaching the scientific method — starting in kindergarten, the kids learn it inside and out. Question, prediction, observation, conclusion and several other words ending in “ion” — I never understood ions, so I’m probably not the best person to recite this. I think there might be a hypothesis in there somewhere; I’ll have to ask the boys at breakfast tomorrow.

But whatever it is, they learn it. And they learn to apply it — to everything. From the mundane to the mind-blowing, these kids know how to use science. Which means every year, the projects run the gamut from disproving the Theory of Relativity, to determining what color lollipops taste best.

The wide gamut also means I get a fantastic opportunity each year to observe Bain’s Law of Science Fair Principality. 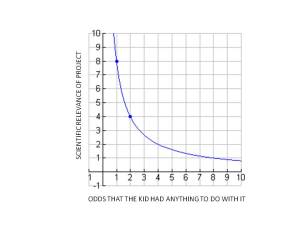 When a fourth-grader submits a project determining the genetic likelihood of disease prevalence in the third generation of a purebred dog family, can there be any doubt his mom’s a vet? Are you surprised that the kid who predicts the sustainability index of fossil fuels has a dad who works for Exxon? Seriously. That kid who measures the power consumption of every appliance in her home is more comfortable reading the display on her Gameboy; she couldn’t ordinarily tell the difference between an electric meter and an electric yard.

I don’t know where it’s coming from, but it seems as if more parents today are becoming more competitive about their kids. There’s a disturbing trend out there of parents delaying their kids’ entry into the school system by a year, just so the kids can have an advantage over the younger kids in their class. I know some parents delay their kids legitimately, because they feel their kids aren’t quite ready and need another year of development to be on par with the other kindergarteners. But there are other parents out there who’ve reacted to that by holding their kids back simply to give them a competitive advantage.

At a previous job, I knew an executive who led a charmed life — a bronzed Adonis with perfect hair, perfect wife, perfect job, perfect car and three perfect kids. One day while talking about our kids, he scolded me for letting Christopher and Matthew start kindergarten as soon as they turned five, having been born in the summer. Because they were born close to the cutoff date, he felt I should have held each of them in preschool until they were six. After all, that’s what he did for all three of his kids.

He ticked the three reasons off on his tanned fingers while grinning at me with impossibly white, perfectly capped teeth. I had to bite back my reply, which would have been, Dude, you’re an asshole. And you’ve gone to great lengths to provide your kids with many years of therapy.

Nope, I don’t hold much with the parents who force their kids to excel artificially. I relate more to the kids who excel naturally, fail naturally and learn and adapt from both — which is why I didn’t want to interfere with Christopher’s science fair project. 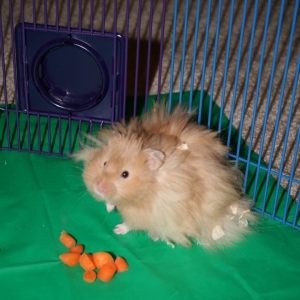 When he first told us he wanted to involve their hamster, Peanut, in his experiment, several scenarios ran through my mind. Each of them ended with me never having to smell that hamster again. But Christopher was more humane; he simply wanted to test Peanut to see which foods he prefers when given a choice between grapes, carrots and seeds. Sure, maybe the results aren’t going to rock the animal nutrition industry, but he devised the experiment on his own. He observed the scientific method throughout and relied on me and Kim only for food preparation, rodent handling and photography duties. We were simply his hands; he used his own mind. And I’m proud of him for that. But I felt heartsick as we left the science fair tonight and he said, “I’m probably going to get an ‘F’ on mine.”

So I stopped until we were in the car and Christopher leaned toward me conspiratorially to ask, “What about their parents, Dad?”

I wanted to tell him not to worry about those other kids, that he should never fear any true competition from the kid who once spent recess licking the other second-graders’ faces. Or that the bully who teases him about being walked to the bandroom by his mom, the same degenerate who once handed me a pen rigged to shock me, in spite of having won a big award tonight, will most likely not be able to rely on help from his dad when he’s sentenced to prison in ten years. But I didn’t.

Instead I told him that he’d come up with his own idea, while some kids had relied on their parents. And I told him he might not think it was such a big deal, but it’s a big deal to me that he’d applied the scientific method to a practical, everyday situation — and that Peanut would now be a happier, better-fed hamster as a result of his research. And Kim told him he’d done the right thing and cleared his idea with his science teacher, then taken her advice on variables to add to the experiment. And we told him that we are proud of him, because he’d shown something that wasn’t evident in every project tonight — integrity. And he smiled, and I think he believed us — and therefore believed in himself.

We should find out his grades soon, but I’m already confident he’ll do fine. Other kids are going on to regionals, while we’ll be having fun at home, feeding Peanut. This project was just fine, as far as I’m concerned.

Although I have to admit, another kid’s project caught my eye as we were walking out into the cold tonight, and I wished for a second that Christopher had come up with it. That way, he could have shared the results with me tonight — it was a determination of which brands of Ibuprofen dissolve the fastest.

Dan is an award-winning humorist, features writer, emcee and entertainer from Raleigh, NC. His collection of humor essays, A Nay for Effort, has earned him fans from one end of his couch to the other. Why not join them and buy one? (You won't have to sit on his couch.) Dan will donate 10 percent of the book's proceeds to education. You can check it out at www.danbain.net; thanks!
View all posts by Dan Bain →
This entry was posted in Education, The Kids and tagged humor, science fair. Bookmark the permalink.

2 Responses to Science fair to middlin’