"Wheels on Fire" makes its move.

Kim insisted that we finish Christopher’s car before she left town and I’m glad she did — there’s no way I would have had time or patience to work on it this week. I actually cut it three weeks ago, just to get that done before I left for Vegas. Having proven myself to be unsteady with the power saw during previous Derby seasons, I suggested he go for a North Carolina theme and design his car like a brick. He wanted to go for speed and asked me to cut a wedge with as thin of a front as possible. That’s a lot to ask of a handheld saw, shaky hands and a small block in a vise, but I did my best — twice. The Black and Decker Mouse helped us sand out the jagged edges left behind by the aborted first attempt. Christopher painted it another day and put it aside until last weekend, when we finished up by attaching the weights and the wheels — twice. But we managed. 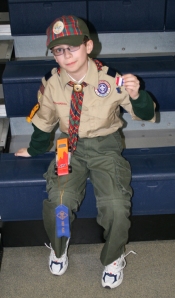 I figured a car assembled in numerous sessions over that much time would be lucky to cross the finish line with all of its parts intact, but was pleasantly surprised to see it hold its own in all three heats. I was even more surprised at the end, when they announced that his was the fastest in his den and the second fastest in the pack. On top of that, he won first place for craftsmanship in his den, proving that a decent paint job can hide all sorts of mistakes.

Matthew also enjoyed the Derby, as two of his kindergarten pals were there to watch their older brothers race, too. He spent most of the event running back and forth between the bleachers and the cookie table and unlike previous years, he didn’t have to be taken to the bathroom just as Christopher was getting ready to race. Probably he wanted to give me a break because he knew we were down by one photographer, what with his Mom being somewhere over the Midwest.

We jumped in the car to head to the airport, when Matthew reminded me that we hadn’t bought flowers. The boys always like to give her flowers when she comes back from a business trip. I told him we could buy flowers after we picked her up, but he said that wouldn’t work, as she would know what we were doing. I told him she wouldn’t care. He didn’t care. He wanted to buy her flowers — which meant I was going to buy her flowers.

The lights were with us and we managed to pull into a Harris Teeter that has immediate access to an exit ramp to the Beltline, and happened to have a parking space open right at the entrance. As we rushed across the parking lot, he reminded me to find flowers in pink, purple or magenta — “because those are girl colors.” He also wanted roses. He’s very particular about the gifts other people buy for him to give. But we found a nice arrangement with white roses and purple … things, and were on our way as he shouted, “Boom, boom — flowah powah!”

During the drive to the airport, Matthew asked if he could be the one to physically hand the flowers to Kim. I told him I didn’t mind if Christopher didn’t. Christopher grunted his assent without looking up from his DSi. Then Matthew pushed his luck and asked if he could tell Kim the flowers were from him. That got Christopher’s attention, along with a few choice comments on what’s fair and what’s not. I told Matthew the flowers were from all of us and he grumpily agreed, but added that he was going to tell her they were his idea. Neither of us could argue that point with him.

Kim was duly impressed with the flowers and happy to see all of us, but not so happy that it had been 72 degrees when she got on the plane and 27 when she got off. The boys suggested that she warm up with a celebratory dinner at her favorite restaurant — they’re very generous with my money that way. But I was impressed when she pulled a crisp, new hundred-dollar bill out of her wallet and offered to pay, having had a good night at the slot machines.

We’re fed and home now — four tired-but-happy people. Matthew’s happy that he got to give Kim flowers, Christopher’s happy that he has a couple of Pinewood Derby ribbons, Kim’s happy to be back home and I’m happy that after six days, we have a responsible adult in the house again.

Dan is an award-winning humorist, features writer, emcee and entertainer from Raleigh, NC. His collection of humor essays, A Nay for Effort, has earned him fans from one end of his couch to the other. Why not join them and buy one? (You won't have to sit on his couch.) Dan will donate 10 percent of the book's proceeds to education. You can check it out at www.danbain.net; thanks!
View all posts by Dan Bain →
This entry was posted in Parenting, The Kids and tagged flowers, humor, mom, parenting, pinewood derby. Bookmark the permalink.